It was Saturday, early afternoon at the city park. Big Eddie, his girlfriend Lisa and five other friends were having a cookout in one of the picnic areas, grilling hamburgers and hot dogs, and drinking beer, while a portable radio on the picnic table blared an FM album rock station. There were other gatherings of families and such elsewhere in the park, with kids playing. A good time was being had by all. 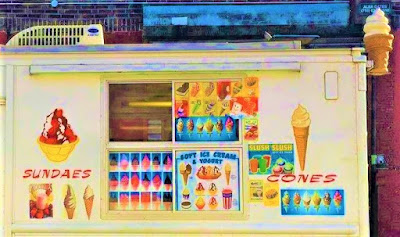 Then, from the distance, the chimes of an ice cream truck were heard. The music, playing “Twinkle, Twinkle Little Star” over and over got louder as the ice cream truck slowly moved in to the picnic area. It stopped right next to where Big Eddie and his pals were partying. Kids from all over ran to the truck with quarters and dollar bills given to them by their parents, ready for frozen treats.

After about ten minutes, Eddie started saying to his friends, loud enough to be heard, “God, when is that asshole gonna leave? That stupid music is starting to piss me off. I can’t even hear the fucking radio, and they’re playing ‘Stairway to Heaven,’ one of my favorite fucking tunes!”

The ice cream man, standing outside the truck and puffing on a stogie as he served his young customers, reached in and turned the music up in response to Eddie’s griping.

“I’ve had enough of this shit,” Big Eddie said, slamming his fist on the picnic table. He walked right up to the ice cream man and said, “Hey! Fuck you!”

“Fuck YOU!” the ice cream man said back.

The two men went back and forth until Big Eddie’s girlfriend Lisa finally approached.

“Guys, can you please just stop this,” she said. “There are children around!”

“Well he’s pissing me off with that fucking stupid music,” Big Eddie said. “De-de-de-de-de-de-de, over and over…”

“I’ve got just as much right to be here as you, asshole,” the ice cream man retorted.

“Fuck you,” Big Eddie shot back.

“Eddie, just calm down,” Lisa said to him. “Go back to the picnic table, have another beer, smoke another bowl, do whatever, but please stop yelling and swearing around all these kids. This is not cool. Not cool at all.”

“Love you, sweetie,” Lisa told him as she reached up to peck him on the lips. “I’ll be with you in a sec.” Then she turned her indignation toward the ice cream man.

“And you’re just as bad as he is,” she told him. “You’re the ice cream man. You’ve got children around, children who look up to you, and all you can say is ‘fuck, fuck, fuck, fuck,’ just like him.”

“Yeah. So?” the ice cream man responded as he puffed his cigar toward her, sending smoke into her face.

“And you shouldn’t be smoking around the children either! What kind of example are you setting?” she added, pointing her finger at him.

“I don’t give a flying fuck,” the ice cream man told her. “I only care about selling fucking ice cream bars! And if you’re not going to buy one, get the fuck out of my face!”

Lisa just sighed and shook her head. “I don’t believe this. This is, like, so pathetic.” She took Eddie’s arm and started walking back to the picnic area.

“Goodbye, lady,” the ice cream man said while waving her away. “Take your asshole boyfriend with you!”

“Fuck you!” Eddie yelled back at him.