Theme song: "The Dangerous Type" by the Cars. https://www.youtube.com/watch?v=kQicIvb_9pc 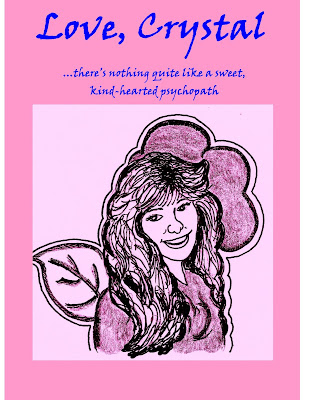 worked part time at the Kinko's . Back in the 1990s, stores with self-service photocopy machines were quite useful to those of us who didn’t have such fancy equipment in our home offices as scanners attached to personal computers. So I was a regular customer there, photocopying and enlarging pictures, copying and pasting stuff by hand for various projects and printing it up.

was always very helpful and friendly. She had an infectious smile and a great laugh, and she seemed to appreciate my sense of humor. She was twenty years old at the time I met her. She had a pretty easy-going personality, she was petite, with green eyes and thick, sandy-blonde hair with bangs, often times tied back in an elastic ponytail holder that was otherwise worn on her wrist, leaving her hair cascading around her shoulders.

As we were getting to know each other, I found I was starting to like her. When she wasn’t too busy with customers I’d wind up hanging around and chatting with her. Soon, I was finding excuses to do something at Kinko’s as often as I could, and would occasionally be disappointed if she wasn’t there because it was her day off.

As it turned out, she sort of liked me too. Over time we began meeting at a nearby Starbuck's coffee shop after her shift. It so happened she lived right by me, in a house with her brother David and sister-in-law Annie. Before long I found myself going to her house after work, on the evenings that she wasn’t working.

When we exchanged phone numbers, we would sometimes wind up talking on the phone for hours. Sometimes it was about the crazy people she would encounter at her work but often times it was about our lives’ ideals and dreams.

“My mom and step-dad threw me out of the house when I was eighteen,” she told me. “My step-dad is such a prick. He said I was a spoiled little princess who needed to be thrown out on my royal little ass. And my mom isn’t much better. She just basically agrees with whatever he says. So they made arrangements to move me in with my brother and his wife, and then they move to ! Just to make it hard for me to move back in with them. I mean, it was totally unfair. And my real dad hasn’t been in the picture at all since I was, like, eight.”

I was a few years older and as I got to know her a little more, she did strike me as immature at times. She complained a lot about her brother David and his wife Annie, who owned the house in which she lived. They were in their thirties, career people, having her as a border. I thought she had a good situation there, her own room, token rent payments, reign of the house and free meals. But she always found something to complain about. "They just want to control me. They expect me to pay them money out of my paycheck. They tell me to do this. They won't let me do that." Her complaints went on and on and on.

Overall, though, she just seemed like an all-around nice girl. She didn’t smoke, and she hated being around smokers. She’d sip a cocktail or a wine cooler but otherwise wasn’t much of a drinker. And she said she never had a serious boyfriend because, “I don’t need the drama. I get enough drama from David and Annie, and my parents, and my girlfriends and their boyfriends.”

“What I like about you,” she told me, “is you’re not all about drama. You’re more level-headed and intelligent than basically anyone I know.”

“It’s good to see finally has a boyfriend,” David remarked to me the first time I came over.

“He’s just a friend, not a boyfriend,” retorted.

“No, it’s okay. Take her off our hands. We won’t mind,” David said to me with a laugh, but I sensed he might not have entirely been joking.

I was never really romantically involved with . I was kind of smitten with her, but we were mostly just pals. I might get a hug or a kiss on the cheek from her but that was as far as it went. I'd go to her house and have a few beers or we'd watch TV together. I'd reluctantly sit through , which took several beers to make that tolerable, but we both liked The Simpsons. There wasn't that much age difference between us but it sometimes seemed we were a generation apart. I liked watching news and intelligent talk shows and she liked watching that prime-time crap. She had no clue who Dick Cavett or Tom Snyder even were. I was also a big Frank Zappa head but she couldn't understand anything beyond top-10 hits. But we connected in a lot of other ways and that was a neat thing.

She knew I was a writer and we often sat in her room, door closed, and she'd show me notebooks of poetry and stories she was working on, asking my opinion. It amused me what a stereotypical "girls' room" she had, complete with a canopy bed and stuffed animals.

After an hour or two of sitting in her room, we'd occasionally walk to a nearby bagel place for something to eat. The closest I came to spending a night with her was when David and Annie were out of town for the weekend and we stayed up, watched late night movies and made omelets and Bloody Marys at

In between visits we’d talk on the phone, and every so often she would send me a card in the mail, usually with a floral design on the cover and a quaint, hand-written message on the inside, such as, “Just wanted to let ya know I’m thinking of you!!! Love, ,” with a smiley face drawn next to her name. I could even faintly smell her perfume on these cards.

Eventually 's relationship with her brother and sister-in-law hit the skids. She could be a spoiled brat sometimes and they finally got fed up and told her to move out by the end of the month.

I told her to "relax, take it easy. There are plenty of places you can move to and you won't have to deal with them anymore."

"I won't have to deal with them if I kill them."

I began to get irritated with her. "Will you quit with that, . You're being ridiculous."

After an intense few seconds, we moved the conversation to other things.

A couple days later she invited me over. David and Annie were there so I assumed she got things patched up with them. We sat in the living room and talked and things seemed normal when she abruptly said "Hold on, I gotta do something."

Annie was in the kitchen getting something to eat. came up behind her with this big hammer, the kind used to bust up rocks when BAM! She slammed it against Annie's head. Annie fell forward, she was out cold.

It was so surreal, I felt like I was only watching a movie or something. My first thought was simply "Wow, she's really going through with it."

David heard the commotion and came running downstairs to investigate when BAM! She knocked him down as well.

I was now stunned, not knowing what to do, not sure if I would be next and certainly afraid to touch anything. She just smiled as she looked at me and said, "Well, I suppose I might as well make sure they're really dead." She casually put down the hammer and pulled a couple of rags from the drawer in the kitchen, tying one around her brother's neck tight enough to strangle him. She went to do the same thing to Annie.

"Oh ick! She's bleeding!" She lifted Annie's head to fit the noose around her. "Eeew! She's bleeding through her nose. Gross!" The blood actually bothered her more than her own violent method of murder. It was surreal.

She then went upstairs and came back down with her diary and some notebooks. "I need to burn these things," she said, putting them in the fireplace and lighting them up.

Finally I said, "I better go. This is getting too bizarre for me."

I couldn't believe how casual she was acting, as if nothing major happened. I used my shirt to handle the doorknob on the way out. I wanted my fingerprints on as few things as possible.

I got home and I was in such a daze. I figured the right thing to do would be to call the police but I didn't want to snitch on a friend. She was, after all, always nice to me. But I realized that I was a witness to murder and it was my duty to come forward. I could be considered a suspect and she could even try to pin it on me.

But my friend actually spared me of that. She turned herself in and she eventually pled guilty. She later told me she cared about me enough to not want me involved in the mess. So why in the hell did she commit her crime in front of me then?!

was sentenced to 25 years to life in prison. There is no death penalty here, though there was no shortage of pundits and other media blowhards calling for it when this case came to light. I couldn't bear to see her, this pretty, thinking, feeling, warm human being strapped down, stripped of every bit of dignity as she's killed by government officials in an institutionalized setting.

I haven't seen since she went to prison. They sent her up to this remote maximum security place that is hard to get to, although we do write to each other regularly. She signs her letters with a heart and smile face. How cute for a cold-blooded murderer.

She recently sent me a photo of her in her skirted prison uniform and that great smile. She signed it, "Love, ," with a smiley face.