Now I Wanna Sniff Some Glue 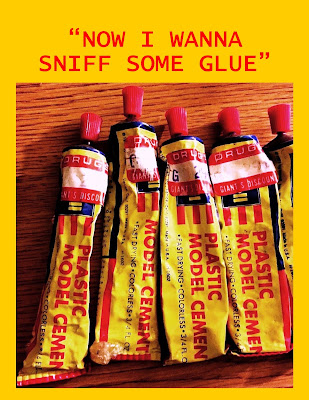 It was the summer of 1973, a particularly hot, humid day. The Delaney family was having their annual family get-together. While music played from the living room stereo, all the doors and windows were wide open, people filled the house, the front and back yards. Adults were drinking and socializing and kids were playing and chasing one another.

Tom Delaney and his cousin Terry Stone, meanwhile, were up in the attic, sitting on the floor and listening to a David Bowie album on a record player they brought up there. The two teenagers were getting themselves high sniffing model airplane glue. The boys made models together when they were younger and had since enjoyed the pleasant effects of glue.

"Wow. This is good shit," said the long, blond-haired Tom.

With rockin' and glue fumes penetrating their brains, they found profound things to talk about.

"Man you shoulda seen this chick I saw at the drug store the other day," said Tom. "She had tits like you wouldn't believe. They were mega-tits, man!"

"Shit, I woulda love to see that," replied Terry. "But I did see this chick on TV the other day with tits that practically stuck right out of her fuckin' shirt! I bet she weren't even wearing no bra!"

They continued to listen to the David Bowie album, talk about "tits" and sniff more glue when a young visitor came up and caught the two in action.

"Hi guys!" said the chirpy 13-year-old Diane, a cousin of the two boys.

Terry had the tube of glue up to his nose and was just a little stunned by the invasion. "The hell you doin' here?"

"I just heard some music and talking up here and I wanted to see what was going on."

Diane noticed the lead tube in Terry's hand. "You're sniffing glue?!" she blurted out loudly and began to laugh.

Diane continued to laugh. "I can't believe it. You guys are hiding all the way up here just to sniff glue!"

The guys did not appreciate being laughed at by a precocious 13-year-old girl.  "Well what do you expect us to be doin'? Smokin' pot?" replied Tom.

"That's a lot better than that shit," Diane retorted.

The boys were at first irritated by their younger cousin but then they began to notice something about her. Her body was beginning to take shape, for one thing, and her clothing did much to emphasize it. She wore a sleeveless shirt with a decal depicting hearts, flowers and clouds, along with very short shorts, revealing her tanned legs and white sandals, showing off her painted toenails. With her soft brown hair framing her maturing face, Diane suddenly didn't seem to be the pesky kid that Tom and Terry had known her to be.

Diane noticed there were several empty Shasta soda-pop cans of various flavors around the boys. "Is that all you guys are drinking is pop?" she asked with mild amusement.

"Well, they won't let us have a beer," Tom replied.

"I could get a whole six-pack up here without anybody noticing," she bragged.

"Okay, I will!" she said with a smirk as she headed downstairs where the party continued to roll on.

"Man, is that chick for real?" asked Terry. Tom simply shrugged his shoulders and took another whiff of glue.

"She is getting some nice looking tits," he said.

A few minutes later, Diane returned with the promised six-pack.

"How the hell did'ja do that?" asked Tom.

"It was easy. A cinch," she said with a giggle.

The three each grabbed a can and as they were lifting and tearing off the ring tabs, Diane said, "Okay, before we even take a sip, let's have a chug-a-lug contest!"

"Oh my god," blurted Tom. The boys could not believe how wild this girl really was.

"On your mark, get set, GO!" called out Diane as the three downed the contents of the cans. While the two boys had to continuously drink and swallow, with foam sometimes shooting from their mouths, Diane was able to suck down almost half the contents at once, although her brown eyes seemed to pop out of her face as she did this.

"Shit! Where'd you learn to guzzle like that?" asked Terry as they took a rest.

I have experience," replied the 13-year-old with a smile. "I can drink wine or beer without any problem at all. I've even smoked pot before, which is a hell of a lot better than sniffing glue, I can tell you that!"

The truth was she had only tried pot once at age 12, and then it made her hack and cough to the point of tears, although she figured at this point she could try it again since she was beginning to smoke cigarettes without too much problem.

"You wanna try it again?" asked Diane, as the three still had about half a can of beer left. The boys agreed and once again, Diane sucked down the remaining contents of her can before the boys could get in four swallows.

"I guess I win!" exclaimed Diane with a big smile as she set down her empty can. Tom and Terry could hardly stand up, loaded with so much beer and glue vapors.

The David Bowie album on the record player had ended. "Want me to flip it over?" asked Diane.

"Go for it," replied Tom as she walked up, turned the record over and set the needle on the first song. She walked back over and sat right between the two boys, making things rather cozy.

There were three cans of beer left and they each had one, this time drinking them slowly. As the album played, Diane chattered away like the pubescent girl she was, while Tom and Terry sat, almost speechless.

When they finished their beers, Diane said, "Let's go downstairs and join the party." She stood up and the boys followed, now more intoxicated than they had ever been before.

Throughout the house and outside as well, the boys followed Diane as she mingled with the relatives. She had hugs and kisses for all of them and they thought she was just the sweetest little girl. And they didn't even notice the beer on her breath.

The boys, meanwhile, had a terrible case of  "the munchies" and before long grabbed a big bag of Frito's corn chips off the large table outside and chomped on them as though their life depended on it. When Diane saw them, she reached into the bag and took a handful.

Among everyone, as usual, was old Uncle Mel and his infamous camera. Every year at the family get-together, Uncle Mel was there snapping pictures wherever he turned and he seemed to have an endless supply of film.

"Hello, Diane. You sure are looking lovely. Let me take a picture of yuh." As usual, Mel was wearing a loud suit and was wasted.

"I have my favorite cousins, Tom and Terry with me. You can take a picture of all three of us."

"I'd be delighted," said Mel. He set up his camera while Diane stood directly in front of the two boys, who towered over her. She gave a big smile as the two just stood there, mesmerized by Mel's colorful polyester suit.

Just as he snapped the picture, Diane grabbed the two boys in a certain place which gave them a rather shocked look as she continued to smile. The picture was shot above the waist so nobody really saw what happened.

"Thanks a million," said Mel as he staggered off to take a picture of the half-eaten potato salad.

Tom and Terry continued to follow their cousin around as she charmed everyone with her cuteness until her mother finally said "Diane, honey, it's time for us to go."

"Okay, Mom!" she said as she joined her parents and they all left the party.

A few minutes later, Tom and Terry looked at each other.

The next summer there was another family gathering at the Delaney's. Tom and Terry were anxious to see their cousin again, to see how hot she was now. And sure enough she did show up, with her parents and her boyfriend, a soon-to-be high school senior who played on the football team.

"Well fuck this shit," said Tom as the two boys went back upstairs to the attic, played a Led Zeppelin album and yes, sniffed some more glue.