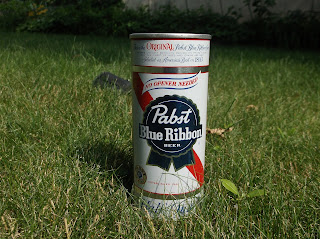 When Harold Nelson died of a stroke in 1998 at the age of 75, his love of Pabst Blue Ribbon beer died with him.

"I'm just glad to be finally rid of that ugly thing," said his widow Dorothy, not of her late husband, but of the giant Pabst Blue Ribbon "No Opener Needed" replica beer can on her property along a county road in western , as a hired demolition crew smashed it into rubble. Harold built the giant beer can in 1967 and insisted it stay right where it is, a constant bone of contention with his wife for thirty years.

Harold himself built and painted the meticulously-detailed giant can, made of concrete with a steel casing and standing at 16 feet tall and seven feet wide, and it became something of a local landmark. The slogan "No Opener Needed" appeared directly above the Blue Ribbon logo, just as it did on the actual Pabst cans circa 1967 when tab-tops replaced the older style cans that required a can opener.

The structure stood up surprisingly well over three decades of weather extremes. There were some streaks of rust on its metal casing, especially around the rivets, and a little fading in its spectacular red, white and blue color scheme, but Harold liked to say that's what gave it character. It was sometimes mistaken for a silo, but it wasn't attached to a barn, it never contained silage, and Harold said he didn't have the patience to farm his land anyway.

The can became something of a tourist attraction as people would drive by and sometimes stop to take a look at the thing. Harold was often asked to take a picture of someone who wanted to pose with it, and he always obliged. Sometimes he'd even offer a full can of Pabst Blue Ribbon to a visitor who wanted to stay for a few minutes and chat. He got a small royalty on sales of a postcard of the giant beer can, and even Pabst took notice, publishing a feature about it in a company newsletter. But with all the fame and small fortune, Dorothy still hated the thing.

"The only reason why people are coming to look at it is because they think you're a fool, and that embarrasses me," she always told him. She could not conceive that people actually liked the structure and admired Harold for creating it. The idea of that did not make sense to her.

Harold and Dorothy were married for nearly fifty years but they didn't really like each other. Harold enjoyed the simple pleasures in life, such as hunting, fishing, beer drinking and watching football on TV. Dorothy didn't like any of those things and was basically unhappy. Nothing was ever right for her. Dorothy complained frequently and loudly, and Harold learned to ignore her, doing pretty much whatever he wanted. Still, he was home every night, and every day as well after he retired, and he never strayed on her.

Harold was a fan of Pabst Blue Ribbon from the very start. It was the first beer he tried as a teenager with some friends back in the late 1930s, not all that long after Prohibition was repealed. He saved one of the cans, and when Pabst came out with a new can over the years, he saved one of those.

Dorothy, on the other hand, did not like beer. But she did like white wine, so much so she sometimes drank it by the jug. Then, with Harold and Dorothy both loaded on their favorite drinks, they would get into petty arguments, until one or both of them finally passed out.

Harold Nelson and Dorothy Fishbeck met in 1946 after he returned home from the war and she was working as a waitress at Fleck's Roadside Diner. As a regular customer, Harold asked her out several times, and finally, she agreed to see a movie with him. She went out with him a couple more times and after the third date, she became pregnant. They decided to do the "right thing" and get married quietly in a judge's chambers before the baby was born.

Coming from a nice, churchgoing Lutheran family, Dorothy regretted ever going to bed with Harold, let alone out of wedlock. She also regretted not having the extravagant wedding she had dreamed of since she was a little girl. But she also believed that once you're married that's it, there's no getting out of it except under extreme circumstances. As long as he never abused her and remained faithful, she was committed to him, even if she ultimately resented it.

In 1947 Dorothy gave birth to a daughter, Cynthia, and in subsequent years the couple had three more children, two boys and another girl. Harold found work in the construction business, using skills he learned in the Second World War, to help build the new post-war . He was a working stiff who wore a hard hat and a white T shirt on the job, but he wasn't necessarily the stereotypical gruff, distant father. He doted over his kids while it was Dorothy who was more of the stern disciplinarian, frequently accusing Harold of spoiling the children.

The Nelsons lived in a small town in Wisconsin near the Minnesota border until 1965 when Harold had the opportunity to buy several acres of cheap land along the county road, where the construction worker by trade could build a house, garage, workshop, storage shed and a giant Pabst Blue Ribbon beer can close enough to the road to be seen. 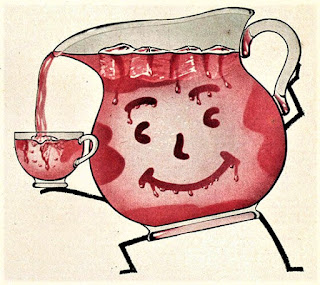 They would eventually have seven grandchildren, beginning with Cynthia's son Tommy, born in 1968. Dorothy wasn't nearly as stern a disciplinarian to the grandchildren as she was as a mother, but she had her quirks that her grandkids found a little odd. She wouldn't buy Kool-Aid, for instance, because she said, she couldn't stand "that hideous grin" on the packages. She also wouldn't go with when Harold brought the kids to the circus or the fair because she found the clowns too traumatizing.

Of all of the grandchildren, Harold was closest to Tommy. Tommy's father, Cynthia's husband, wasn't around much so Harold became the father figure and best pal to Tommy. Harold taught him about fishing and hunting and football and beer. They had many man-to-man talks about navigating through life and dealing with the problems that come up. Taped to the walls in his workshop, Harold had drawings Tommy made for him over the years, including depictions of him or the two of them together, and of the giant beer can.

As Tommy got older, they remained close. When he was in his late teens and driving, he'd occasionally bring a few of his friends to meet Harold and see the giant beer can, and have a rap session over a couple of beers with Harold in his workshop. Grandma Dorothy wasn't too happy about having "all those hooligans" hanging around, but Harold would tell her, "They're Tommy's friends and they're good, decent kids. Stop being such a killjoy, woman."

Tommy was 30 when Harold passed away. Dorothy had said for years regarding the Pabst Blue Ribbon monument, "When Harold dies, that ugly thing is getting torn down," and indeed, one of the first things she did was contact a business that could do the job. Tommy begged and pleaded with her not to do it, and fans of the giant beer can from around the country wrote letters asking her to preserve it. All of them went straight in the trash. Tommy was able to get Harold's Pabst memorabilia collection and the drawings he made for him as a kid before Dorothy trashed those.

Dorothy finally passed away in 2010 at age 86, twelve years after Harold's death. Beige, hulking condominiums now sit on the old Nelson property, for middle class people wanting to live "in the country," even though it really isn't "the country" anymore.

A recent visitor, who was trying to pinpoint where the giant Pabst can once stood, was told by a security guard to leave immediately or be arrested. The security guard had no clue what the visitor was talking about as he tried explaining why he was there. The security guard just chalked it up to his colleagues as "some loony tune."