A Trip at Granny's


A child's memories of his eccentric grandmother in the late 1960s. 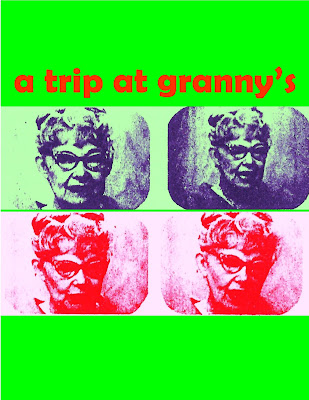 The booze sure did flow at Grandma's house. That's where the action was. Her name was Henrietta. We kids just called her Grandma Henry. She was a big woman, a matriarchal type. She wore pointed cat-eye glasses, chain-smoked, owned a couple of street-corner bars and was not afraid to express an opinion - and shout you down if she disagreed with you.

She lived with Grandpa Jake, her second husband but in separate rooms. They had been divorced for years. Jake was a skinny, balding brewery worker who smoked air-tipped cigars and grinned a lot. He knew his place in the household. He was on the company bowling team and had a nice display of his bowling trophies.

Back in the swinging sixties, going to Grandma Henry's and Jake's house was always fun. Lots of laughter and music came out of that house, either from the old piano or from the Dean Martin records. The TV was usually on too, with the sound off when the music was playing. They had a color TV! Big, pumpkin-shaped screen with an attached stereo record player and AM-FM radio.

I remember seeing shows like My Three Sons or Bonanza for the first time in color there, with color commercials for Hunt's Tomato Catsup and L&M cigarettes, often without sound as Dean or Sammy or Frank crooned away. Sometimes Mom would play the piano, Dad would join in with his banjo and they'd sing old songs together.

In the basement was a pool table and sometimes Dad and Jake or Uncle Mitchell or somebody would be down there shooting a few games for fun. I just wondered where those numbered, colored balls went when they disappeared in the hole.

Meanwhile Aunt Pam and her friends would be in one of the upstairs bedrooms, listening to 45s on the little record player. Gary Lewis and the Playboys, Nancy Sinatra, that kind of stuff. There were always strange smells coming out of that room. Lots of giggles too.

On other visits, the card table would be out and Grandma Henry, Grandpa Jake, Mom, Dad, aunts, uncles, all the relatives would sit around it, shuffling, dealing, talking louder the drunker they got. The house would be filled with smoke, making my little eyes water.

There'd be a big platter of cheeses, meats, chips, dip and Ritz crackers to eat from. Lots of Pepsi and 7-Up as well if you were too little for a beer or vodka martini. Then came dinner. Always something good and lots of it. You didn't go hungry at Grandma Henry's house.

Hanging high above the dinner table, a gold and yellow Shell No-Pest Strip to keep the flies away. It looked like a neat toy but Grandma wouldn't let me play with it.

While the family was playing cards, and I happened to be walking by, Grandma Henry would often stop me and say "Jeffrey, would you be so kind as to bring me another beer," handing me her glass. Inevitably somebody else would say, "Oh, as long as you're headed that way…" Soon I'd be bringing everybody's drinks on a metal serving tray. It was fun though.

That's the stuff of childhood memories. My Grandma knew how to have a good time and throw a party. Perhaps she was too good at it.

When my Uncle Mitchell graduated from college, that was cause for celebration. I remember riding to Grandma's in Dad's blue '65 Ford and you could hear the festivities from down the block. Dad, Mom and I walk into the place and everybody's there. All the relatives, Mitchell's college friends, probably half the city council and mayor too. Grandma Henry always had good connections.

My parents grabbed a drink and faded into the crowd. I joined my young cousins in running around the house, up and down the stairs, in and out of the basement and jumping on the beds on second floor. Mitchell had reign of the stereo and the rockin' sounds of Iron Butterfly and Jefferson Airplane filled the house.

Pretty soon I grabbed a cookie and a couple of brownies off the big table. I noticed what looked like little bits of dried leaves in those snacks but they tasted all right so I didn't think much of it.

Before long I began to realize that in my seven short years, this was the best time I've ever had in my life. People would come up and say "How's Jeff doin'?" and I'd say "I'm having more fun than I've ever had!" and they'd say "Good for you!"

Also on the table was a punch bowl. Figuring it was just good old Hawaiian Punch, I helped myself to a glass and nobody bothered stopping me. Yuck! Pooey! There was booze in it. There just might have been something else in it as well.

I remember starting to feel a bit chilly, yet I was sweating up a storm running around the house with my cousins. My fingers and toes started to tingle pleasantly. "C'mon, Jeff! Let's play hide 'n' seek," said my cousin Doug and it sounded as though he was talking through a chamber.

Around the house the laughter got louder and the music got weirder but I only vaguely thought about that. I was just having the greatest time of my life and that was all that mattered.

I looked up and saw hanging from a window these yellow and orange daisy-patterned curtains. They were probably always there but I had never noticed them until now. And what a beautiful and fascinating work of art that I had been neglecting all this time, I thought, at least in the way a seven-year-old would articulate that.

I looked in all directions of the room, observing my surroundings and realizing what a splendidly bright, colorful world I was in. People were coming up, stooping down to talk to me and their faces seemed somehow bigger than the rest of their bodies. Bigger than life, really. Maybe it was just the angle at which I was looking at them. 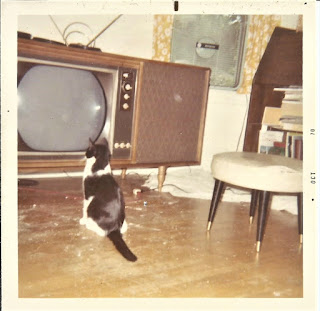 Again the color TV was on with the sound off. What was on? Some variety show, I think. There was some lavish dance number where everybody was wearing these gaudy, colorful costumes.

The whole idea of color TV was fascinating to me because all we had at home was a black and white portable set with a broken aerial and it tended to make a buzzing sound. Color TV was so neat. I wanted to become better acquainted with it.

I looked closely at the screen. The lavish dancers with the gaudy costumes faded into vast dimensions of red, blue and green dots. Then there were the knobs below the channel changer. What do they do? One made everyone's faces turn bright red or bright yellow. Another made the faces blue or green. I played with the knobs, manipulating the colors in so many different ways. Nobody was telling me no, and in fact some of Uncle Mitchell's college friends seemed as fascinated as me. I heard one of them say "You've invented psychedelivision, man."

When I finally decided to find something else to do, one of the college guys started playing with the knobs. I wandered into the kitchen. The kitchen seemed much more vast than I ever remembered it to be. Grandma Henry was in there fixing more snacks for the partiers. I asked her for a glass of water and when I spoke, I felt as though I was under water.

Furthermore, she didn't seem to understand what I was saying. She kept going "Huh? What?" I pointed to the faucet and she finally got the drift. When Grandma Henry handed me the glass of water she suddenly looked scarier than I had ever seen her before. Those cat-eye glasses and bulging eyes actually frightened me. The wrinkles on her face looked deep and I saw sprouts of hair in them. Her long fingernails looked like claws. I took my glass of water, turned my head and got away from there.

The night continued on as I explored this whole new world at Grandma's house until….the police came. They just walked right in and swept everyone away. At first I thought they wouldn't notice me or that I was too young to get arrested but they took me and the rest of the kids as well.

The next thing I remember is waking up in my bed at home. The sun was shining through my window as it did every morning. But looking around my bedroom, it seemed to be spinning ever so slightly.

I called for my mom. I asked her, what happened at Grandma Henry's last night.

"It was just a dream. Forget about it," she said.

"I said forget about it!"

Later on, if I said "Mom, remember when I had that dream about…." she'd always say "Forget about it, Jeff. Just forget about it."