YOU CALL ME MISTER FORD!

(Content may be offensive to some members of The Community) 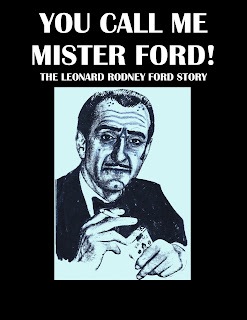 Back when they started wiring all our homes for cable TV, there were suddenly so many more channels to watch. My friends, for the most part, were infatuated with all-day music videos on MTV or uncut R-rated slasher and bikini movies, but for me it was the oddball low-budget programs on the public access channel that turned my crank, especially when that surly old man named Leonard Rodney Ford was on.

He hosted a program called Community Forum, which was probably the most violent public affairs show ever. The show's title seemed innocuous enough, but the host was a lunatic. He was a thin, frail-looking man probably in his seventies. He had greased hair, a pencil-thin mustache, a leathery, wrinkled face, and he always wore what appeared to be a circa 1935 tuxedo, complete with a bow tie. Almost like the stereotypical movie villain. He began each show standing at a organ, playing this strange theme song as the title and opening credits rolled across the screen.

"How do you do", he'd say in a snarly, graveled, rather nasal voice. "This is your Community Forum, and I am your host, Mister Ford." He'd continue playing the organ as he talked about that edition's guest.

His guests were so-called community activists looking for a place to promote their cause. But Mr. Ford hated just about everybody who had a cause and with no studio audience and no warm-up, just about anything happened.

One show that sticks out in mind was when an environmental activist named Michael M. Shepherd was on. As they argued over the merits of clean air and water legislation, Shepherd's first mistake was calling the host by his first name.

"You have to understand, Leonard, that the earth is a fragile place..."

"You call me Mister Ford!" he snapped, his face close enough to Shepherd's that they almost touched noses. When Shepherd apologized and put his hand on Mr. Ford's shoulder in a friendly gesture, the host pushed him away, yelling "You get your filthy, communist hands OFF me!"

Shepherd pointed out that the word "communist" actually comes from the word "community" but Mr. Ford abruptly got up and started playing the organ, drowning out anything Shepherd had to say.

Mr. Ford was indeed touchy about his name. When asked why, he snarled, "I am the host of this Community Forum, and as the host, I demand respect! If you have a problem with that, then I suggest that you get out of here and don't come back. And I will see to it that you will never appear on another television or radio program again!"

Another show had feminist Deb Zworkin, who was on to talk about sexism and the plight of women in the workplace.

"A woman's workplace is the kitchen and the bedroom," Mr. Ford told her, in no uncertain terms.

"Ford, you are the number one leading oppressor of women," replied Zworkin.

"That's Mister Ford and if you were a man or my wife, I'd belt you!"

"Go ahead," she taunted.

BAM!  He hauled off and cracked her across the jaw.

When Asian-American rights activist Steven Wu called Mr. Ford "an example of the typical Caucasian-American racist", the host eloquently responded, "Listen here, slant-eyes, I slaughtered gooks like you in the Korean War and I'll do the same to you right now if you don't watch it!"

"That's right," Mr. Ford told him. "Get your little yellow ass the hell out of here. And don't ever come back!" He then forcefully shoved Wu from behind, knocking him to the floor. Mr. Ford then kicked him and yelled, "I said get out of here!"

When gay activist Bruce McKenzie showed up, the host wore an asbestos suit and gas mask because "You probably have AIDS." The interview lasted a whole ten minutes when the guest, smirking, said "Oh, you're such a homophobe, Lenny-poo." Mr. Ford wasn't going to stand for that kind of disrespect.

"Homophobe? I'll homophobe you!" He punched McKenzie in the face, knocking him backward in his chair. "And the name is Mister Ford!"

I would have friends over to watch this thing and we'd be drinking beer and doubling over with laughter. "You call me Mister Ford" became a running gag among us as we'd mimic his voice. The girlfriend of one of my buddies, however, couldn't stand it when I had Mr. Ford on when they were over. She'd sigh loudly and say, "Could you, like, change the channel," not as a request, but as a demand.

"No he's NOT. He's not cool and he's not funny. This show makes me very uncomfortable."

"Too bad," I'd say. She'd let out loud sighs and roll her eyes, but I don’t take demands from someone else's girlfriend too seriously.

I don't ever remember seeing a guest lasting an entire show, except for the AARP representative who called for more government benefits for seniors. That was one guy Mr. Ford agreed with. Otherwise, if guests didn't leave on their own in anger or in tears, they were usually punched, kicked, shoved into cameras, hit with a cane, you name it. If somebody dripped blood on the studio floor after being beaten and forcefully ejected, Mr. Ford would point to it and yell to a custodian, "Clean this up!"

One guy who seemed to follow protocol by saying "Yes Sir, Mr. Ford" was punched for "being a smart ass." To fill the balance of the program upon someone's abrupt departure, Mr. Ford would entertain his viewers by playing his organ.

Then there was my favorite show, the one when Syd Vomit, a punker dude with spiked green hair who represented some anarchy group, was on to argue with Mr. Ford. When Syd called the host "dude" a few too many times, he was warned, "Don't ever call me that disrespectful word, you funny-looking freak of nature. You call me Mister Ford or you call me Sir!"

Syd put his hand up to his ear pretending he couldn't hear and said sarcastically, "What was that? Sister Ford?"

Mr. Ford picked Syd up by his leather jacket, got in his face and shouted, "It's Mister Ford, PUNK!" He threw him back down in his chair.

Mr. Ford punched the young anarchist in the face with full force. The punker got up and tried to fight back, but Mr. Ford quickly knocked him off the stage and brought him down, grabbing a spike of his green hair and slammed his head into the cement studio floor with several loud thumps. When Syd managed to pull away and run for the exit, Mr. Ford grabbed an unplugged microphone and threw it at him, yelling, "Get out of here, you rotten kid!"